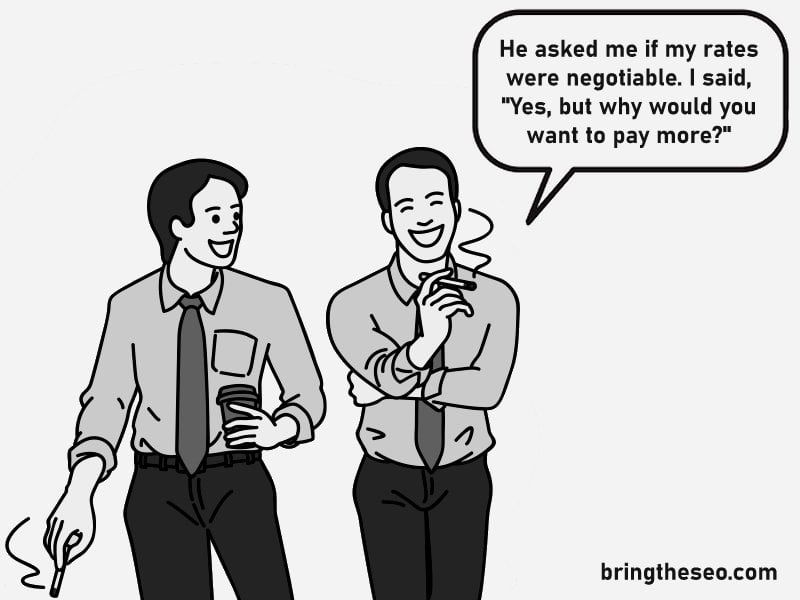 Belinda:               You know. And so, I’m super, super comfortable now going, “Payments up front and don’t… As soon as I receive your payment we can get started.” And that just comes out before I even-

John:                     My approach when it comes to payment, I don’t fuck around, I’m not in this for shits and giggles. I’m bringing 20 years worth of experience to the table. So you either pay me, or if you want to play games, go and play them with someone else. But getting payment upfront, in advance, as you’ve adopted, and I’m glad that you have, and it’s so refreshing to hear. Again, you’ll see these conversations in plenty of Facebook groups. Especially in web design, I see it in web design a lot.

Belinda:               I’ve got all sorts of different bits and pieces, especially all my little stuff, is all paid in advance. Like some of the, if it’s a retainer type situation and mine is the Google Ads, I don’t do it like you, I do do it month to month, because that just keeps me sane and works with my personal roster around my husband’s work schedule. So I invoice people on the 23rd, or I expect the money by the first. If it’s not there, I don’t manage your account, I’ll turn it off. That’s for the Google Ad side of things. SEO is the same. If their payment terms are 14 days, no worries, I’ll invoice you on the 14th, that’s easy. You will pay me by the first and if you don’t, I won’t be working for you. But in saying that, I have some delightful customers that get me to do everything and you’ll shake your head and get cranky, but that’s okay. And they pay retrospectively, but they pay every bloody time and that’s fine.

John:                     Getting paid up front, in advance, solves a lot of problems. And like you said, the invoice fires out. I’ve got mine set up through Xero, it fires out. I make sure that I get the reporting and everything over to the client before that invoice fires, so it doesn’t feel like they’re just getting, – I haven’t gotten anything and they just getting slammed with another invoice. I keep an eye on that.

I actually CC myself on the email that gets fired with the invoice. So I know it’s sitting there in my inbox. So I know to log in and check to make sure that payment has come through. If it’s come through, then I clear it out of my inbox and I carry on. But if the payment hasn’t been made, then down tools, I’m not doing anything. I’ll send them a friendly reminder and say, “Don’t forget invoice.” Because shit happens, right? Life gets in the way. I’ve had clients that have passed away, or they’ve been in hospital, or they’ve been unwell, or something else has gone wrong. So I never just make the assumption that, “Oh, these assholes haven’t paid” and get real nasty with an email. So I understand that but-

Belinda:               I’ve only got one and it’ll be and he’s a delight and I won’t speak to what he does, but I should have known better, but I’m still ahead of the game, right? So he wanted to pay me weekly. Oh, you’ve got 18 weeks was going to be that. So we had a pile of stuff to do. He wanted to pay me weekly and that should’ve been a red flag in itself. And I’m like, “However you need to pay, whatever, I don’t care, as long as you pay me.” But it’s always in advance, even though it’s the short sort of time frames and he’s not interested-

John:                     It should work like paying rent, right? You don’t live in a place for a month and then pay your rent, or at least not here in Australia. You pay up front and then you fucking live there. Your rent is always paid in advance. And you don’t call the real estate and say, “Uh, listen, things are a bit tight this month, or this week, can I, instead of paying $800 at the end of the week, can I just give you $100 now and I’ll be down on Wednesday and I’ll give you another $50.” You’d be out in the fucking street. That’s how I take the approach when it comes… This is fucking business, right?

And one thing that I make real clear with my clients is that, if you pay two weeks late, then you’re going to get the next fucking invoice in two weeks, and that doesn’t give me enough time to get the work done. Because I’ve got to try and jam everything in, in a shorter time period. So it becomes this concertina effect. I make that real clear during the end of month strategy call. So have you got, “Don’t forget, you got the invoice over there.” “Oh yeah, no, that’s fine, John, we’ve already sorted it out.” “Okay, great.”

Belinda:               You pay me and I love your topic and you’re a joy to work with. So I have a HR consultant in Melbourne and she is just a delight. I got an email from her on Thursday night at 8 o’clock going, “Woo-woo, I just got a phone call” and she was literally, there’s 45 exclamation marks in the heading and I was just so thrilled, because she’s just a delight to work with.

John:                     It makes a tremendous difference. I talk about pre-qualifying your leads and even if the numbers, and sometimes you don’t know, right? Sometimes you don’t know until you actually start working together, what the person’s like. But even if the numbers stack up on that first call, sometimes you got to go by gut instinct. I’ve often turned people away and said, that just didn’t feel right for me, or I’ve worked with five other agencies and they’re all crap. Sometimes it’s the client that’s the problem. But, like I said, sometimes you don’t know what a person’s like until you start working with them. The same could be said for a relationship, right? You’re dating and everything’s peachy and then you move in together and they do shit that drives you mad, like dirty socks, or they leave the dishes stacked on the sink and you say, “Oh, fuck.” It’s hard to know, but I’m in total agreeance.

I think clients that pay upfront, or even in advance. I’ve had some clients that say, “Fuck it, John, let’s pay six months in advance.” I’m enthusiastic about working on their campaign and I will sometimes do things that I probably shouldn’t do, because I know that they’re actually on board and they’re invested and they take what I’m doing seriously.

Belinda:               It’s so true. I’m wondering if clients even think about it. I wonder if they’ve even thought about… Because you know, it shouldn’t and it doesn’t make a difference to the actual quality of the work. I wonder if they even think about the fact that I might have 10, or… So that’s 10 clients at a time and seven of them are paying me in advance. And I love the topic and I know their topic where, or I know their location, or whatever, and you’re dragging your toes and you’re not behind me and you’re making me waste my time chasing you. Have you thought about that?

John:                     Some people might argue that you should be automating the payments and I would probably agree with that. Automating payments can certainly remove a lot of these problems, but it certainly won’t solve all of them. I’ve got a close friend who runs a very large scale agency in Sydney and all of their payments are processed automatically using EzyDebit yet, right? They have a team of three people in their organisation, that’s all they do, is follow up late or outstanding invoices.

Ready to take your SEO business to the next level?

Start Your FREE Trial of Bring the SEO

Get step-by-step guidance from me on how to grow your SEO business, deliver better services to your clients in less time and maximize your earnings.