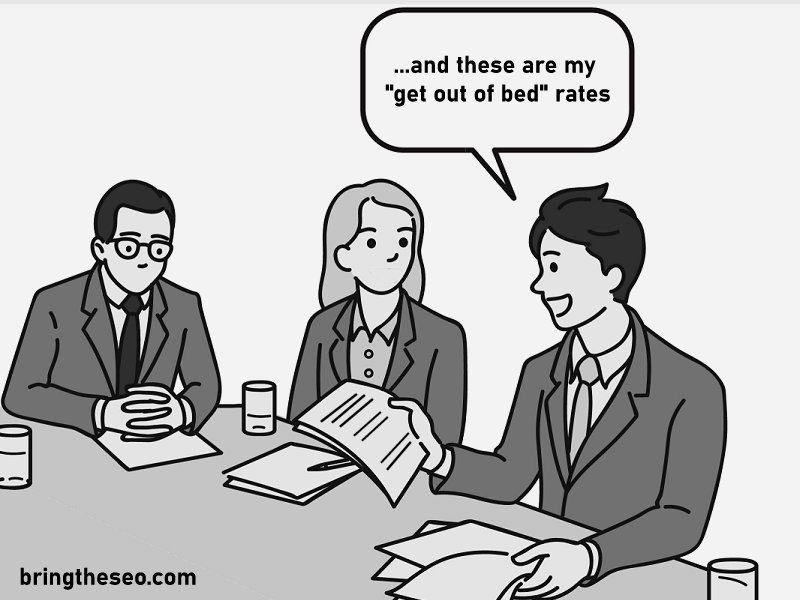 Matt:                     Yeah. I think another thing that’s been on my mind lately is when you get into a contract with a client, you’ve been with them for years, and I’ve had some clients I’ve had since we’ve been in touch. Unless you put their rate up on a regular basis incrementally, you sort of get to a point where you think, well man, it’s been a couple of years since we looked at the rate and it’s gone up a bit, now I’ve got to get back to them with a big up front. So there’s got to be a mechanism somehow that you implement incremental changes as you go.

John:                     Yeah, I’ve certainly been in that position and I know that ideally you want to bring everyone across. You don’t want to lose everyone. I know this has been true for a lot of new members in the group that do my training and then come out the other end and go, “Fuck, what do I do now? I’ve got clients that are paying me $400 a month. I can’t do all of this work and hire staff and pay for all of my operational costs at $400 a month. So what do I do?”

John:                     I still have a number of clients that are on my old legacy rates. They’re paying $1,500 to $1,800 a month, and I’ve decided to keep those clients on board because they’re just fucking great clients. They let me do what I need to do. They don’t question anything. There’s no objections. There’s no constraints or nonsense going on. I’ve had to drop the quantity of work in order to make it fit. The quality of work’s still there, but instead of doing 5 Q&A’s a month, we might only do 3. Might only do three or four guest posts or part of outreach and link building.

John:                     But in terms of bringing people across, for the ones that gave me the shits, I say, “Listen.” (and this is something that I make a habit of doing). I don’t ever just make the step like this. Right? You’re not going to go from paying fucking $1,500 a month to $2,500 because I think that’s too much for people to get their head around. If you can pull it off, then that’s great. But what I normally do is say, “Listen, we’ve been working together now for five years. I’m going to be putting my rates up in six months. They’re going to move from $1,800 to $2,500 in six months. And the reasons for me doing this are because my costs have gone up, the stuff that we all know about, right? I got to pay my staff more, costs of the fucking software and everything else. Plus I know that I’m providing a good service.”

John:                     And certainly if you’re tracking and measuring and reporting against revenue and not rankings, then it shouldn’t be a problem, right? Because dollar in, six or seven dollars out, if they’re smart then they shouldn’t be thinking, “Oh fuck this is so expensive.” I spoke with a client just recently Who said, “John I want to put another 20 grand in. I’m like, “Fuck dude, I don’t have the capacity right now.” I actually had to say no to $20,000. But that’s what I normally do, Matt. I normally say, “Okay, my rates are going to be going up.” But I give them time.

John:                     And I never… I shouldn’t say never, but I don’t think I’ve ever made a massive jump from like $800 to $2,500. I think when it comes to any types of changes or restructuring within your business, the best thing you can usually always do is just, and I use this saying a lot, is measure twice, cut once. Get it really clear in your head about what you want to do, how you want the outcome to be, and give yourself time to think it through. Because I’ve certainly, and this is something that will probably never change, I sometimes sit down and think, ooh, that sounds like I should look at doing that. That seems like a really good idea. Scribble down in my notes and the longer I’ve got to think about it, a week or two weeks goes by and I think actually there’s a better way to do this.

John:                     So I think I’ve gotten into the habit of just give yourself time to think everything through. And then just getting back to my point a second ago, getting on the call with the client and having a face to face discussion like this. You see this everywhere. “Oh my client’s giving me the shits, or this client wants me to do that, and they want me to do this and they’ve got the wrong level of expectations and blah blah blah.” Just get on a call. Get on a call. Me and Byron, big fans of face to face video calls because you can get the emotion, the tone, and everything across. And you can usually work things out. And if that means having to negotiate some sort of deal so it’s beneficial for everyone, then do it.

John:                     But yeah, I usually give people a bit of time between changing my rates. And like I said, if you’re reporting against revenue, not rankings, they’re paying $1800 a month and they are getting $70/80,000 out of that investment, should be a fucking no brainer. And it’s funny because I know some people in the group have put their rates up since doing the training and had people come back and say, why did it take you so long to ask?

Ready to take your SEO business to the next level?

Start Your FREE Trial of Bring the SEO

Get step-by-step guidance from me on how to grow your SEO business, deliver better services to your clients in less time and maximize your earnings.